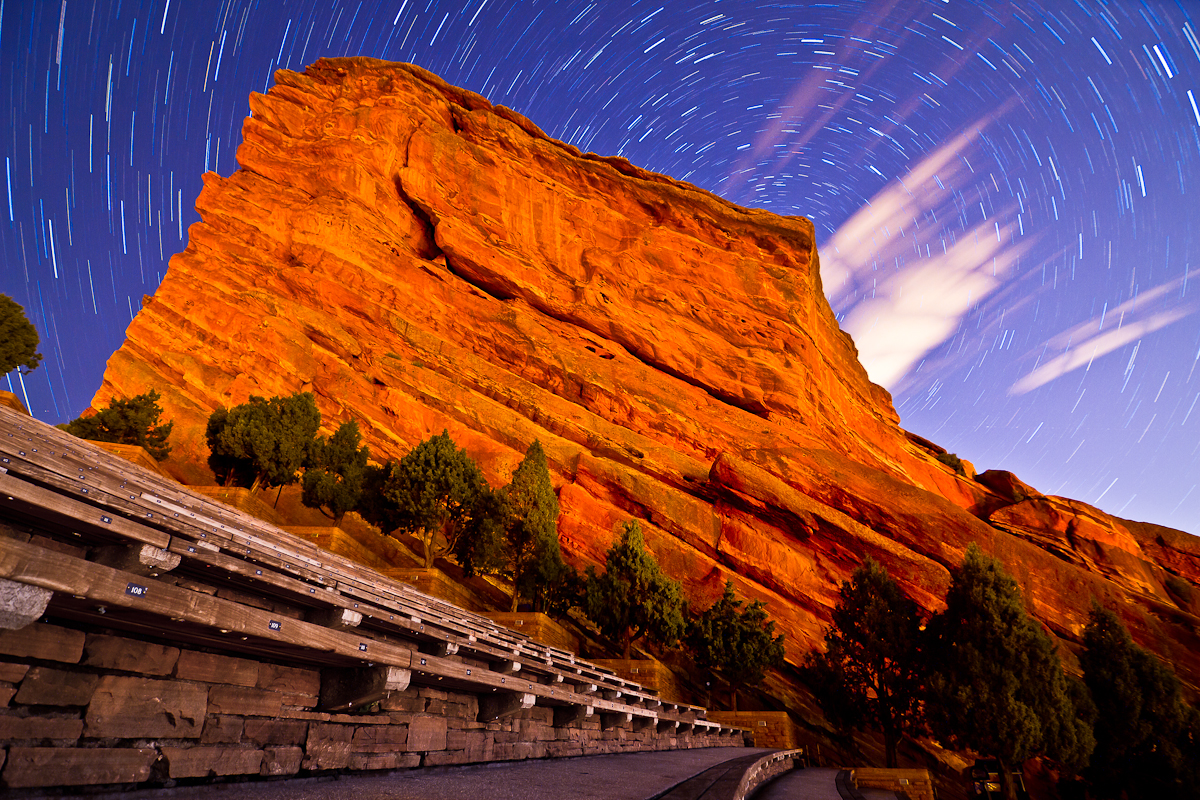 UPDATE: Red Rocks has reopened to visitors on a limited basis. Park entrances 1 and 3 are closed. All traffic must enter through entrance 2. The Trading Post is open. The Visitor Center and Ship Rock Grille remain closed, but concessions are being sold on the top plaza. Visit the new Red Rocks WEBSITE for full details and event schedules.

Red Rocks Park and Amphitheatre is one of the most iconic concert venues in the world. Tucked away in the foothills of Jefferson County, just west of Denver, Red Rocks is a natural wonder that calls to world-class musicians and their devoted fans with beautiful surroundings and perfect acoustics. Some have even described playing the venue as a spiritual experience.

These incredibly massive red rocks form a natural amphitheatre that sits 6,450 feet above sea level. It gifts visitors with unrivaled views, amazing sunsets and night skies teeming with stars. The City of Denver owns this gem of a park, which encompasses 738 acres filled with deer, pines and prairie, geological wonders and spectacular vistas. (Oh, and dinosaurs. Yes, dinosaurs!)

Red Rocks is a strangely wonderful glimpse of the natural toughness and unbelievable beauty that only certain places in the world can offer. The mountainous and sometimes desert-like terrain is an environment almost entirely unique to Red Rocks. The higher elevation is also an element that some visitors may not be expecting.

The Beatles used oxygen tanks to offset the effects of the elevation at their Red Rocks show on Aug. 26, 1964. U2 fought miserable weather in front of a small crowd to produce one of the most memorable concert videos of all time (“Under a Blood Red Sky”). John Denver played 17 shows at Red Rocks between 1972 and 1989. Blues Traveler has headlined a show on July 4th every year, except one, since 1994. There was even a riot at a Jethro Tull concert on June 10, 1971, that prompted a five-year ban on rock concerts at the venue because too many fans showed up and the crowd became unruly after being turned away from the event.

The park is a unique transitional zone where the Great Plains meets the Rocky Mountains. The diverse environment allows visitors to see plants, birds and animals of both regions. Red Rocks was originally known as the Garden of the Angels, and the three main monoliths that tower above the amphitheater stage are the subject of many pictures. They are over 300 feet tall and called Ship Rock, Stage Rock and Creation Rock. These formations provide the acoustic perfection for any performance.

It’s truly a geological phenomenon – the only naturally-occurring, acoustically perfect amphitheatre in the world. As the city points out in press materials: “From Sting and The Beatles, to opera stars and U2, every artist aspires to play on this magical, spiritual and emotional stage.”

Of course, Red Rocks is much more than just music. Guided tours are offered, and the park has become a Mecca for bicyclists and hikers. Visitors embarking on a guided tour will be shown what time and persistent pressure can create. These gigantic rock formations were the work of tectonic plates shifting sheets of rock upwards towards the heavens. Millions of years of erosion chiseled away the softer rock to leave behind these monstrous monoliths.

These dramatic sandstone monoliths serve as a history book of animal and plant life in the area for the past 250 million years. As spectators gaze at the towering red sandstone rocks, they view the ancient tales of prehistoric times. Dinosaurs have been discovered throughout the area. In fact, the first bones ever found of the prehistoric legends, the Stegosaurus and the Brontosaurus, were both found in the nearby area. The site is now home to Dinosaur Ridge, a National Natural Landmark, that also includes a visitors’ center. Just a short distance away from the Red Rocks Amphitheatre, Dinosaur Ridge has two trails where visitors can view geologic sites, dinosaur bones, trace fossils and walk amongst perfectly intact dinosaur tracks.

Much like the sheets of rock that formed Red Rocks, the Amphitheatre’s history has many different layers to it.

The performance history at Red Rocks starts with John Brisben Walker in the early 1900’s. He had a vision of artists performing on a stage nestled into the surroundings of Red Rocks. He produced a number of concerts between 1906 and 1910 on a temporary platform.

George Cranmer, manager of Denver Parks, convinced the city to buy the land from Walker for the price of $54,133. At Cranmer’s urging, the city enlisted the Civilian Conservation Corps and the Work Projects Administration to build the foundations of the park as we know it today.

Denver architect Burnham Hoyt designed the amphitheatre with an emphasis on preserving the natural beauty of the area. Plans were completed in 1936, and the amphitheatre was dedicated on June 15, 1941, through the actual construction spanned 12 years. In 1947, the first annual Easter Sunrise Service took place.

Red Rocks Park and the Civilian Conservation Corps camp received National Historical Landmark status in 2015, and received the honorary award on June 15, 2016 – the amphitheatre’s 75th anniversary. The award is administered by the National Park Service on behalf of the Secretary of the Interior. The designation recognized sites that possess exceptional value and quality in illustrating or interpreting the heritage of the United States.

Much of that value comes in the geology of the park. Gradual earth movement slowly raised the great sandstone ledges from the prehistoric ocean floor, to form the “walls” of the amphitheatre. Within these walls is contained a record book of the ages as nearby dinosaur tracks tell of the Jurassic period of 160 million years ago. Fossil fragments of the giant 40-foot sea serpent, Plesiosaur, the marine reptile Mosasaurus, the aforementioned Stegosaurus and Brontosaurus, and flying reptiles all captivate students and geologists alike.

Some of the rock formations in the park slope as much as 90 degrees, while others tilt backwards. The southern monolith is named Ship Rock because it resembles a ship. On the northern side, opposite of the amphitheatre stands Creation Rock. Both of the monoliths are taller than Niagara Falls. Stage Rock can be found to the east.

A tiny town with a population fewer than 500 can be found nearby.  Morrison, Colorado, is named after a man that played a huge role on the history of the entire area.  George Morrison made many contributions to the history of Jefferson County. Today, the town he founded is the perfect spot for travelers to take a break from exploring Red Rocks and to settle in for a quaint evening.  There are a handful of great restaurants and places to stay, including the Cliff House Lodge & Hot Tub Cottages.

With themed private cottages surrounding the Cliff House Lodge mansion, this building was the first ever built in Jefferson County. The Lodge is just seconds from Red Rocks Park and Amphitheatre and is within walking distance of the best attractions and dining Morrison can offer.  It’s a short drive to nearby ski areas, as well.  Indoor Jacuzzis and private outdoor hot tubs also bring a relaxing and romantic appeal to the lodge.

Red Rocks truly is a perfect destination for anyone looking to travel somewhere special and unique. A day spent walking through gigantically mystifying rock formations, seeing the beauty in nature that only time can construct, and ending with an evening at the best naturally formed acoustic venue listening to music should be on everyone’s bucket list. 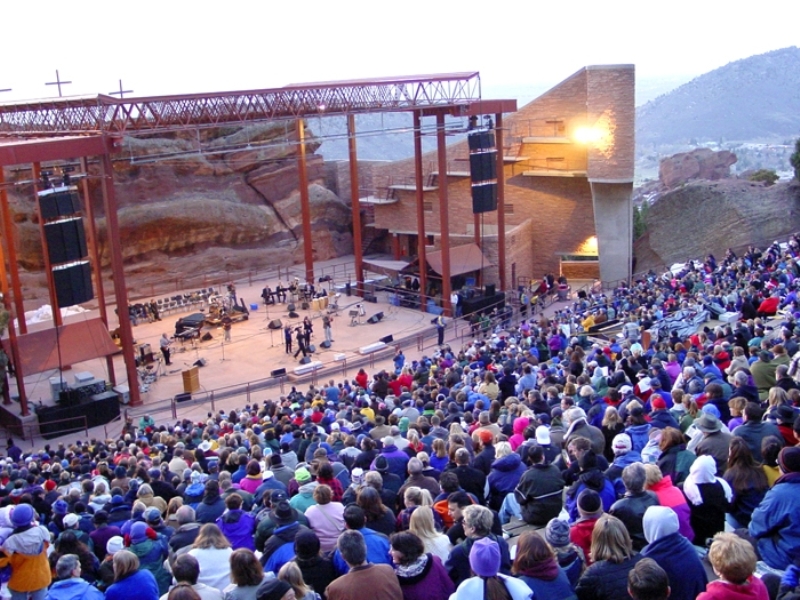 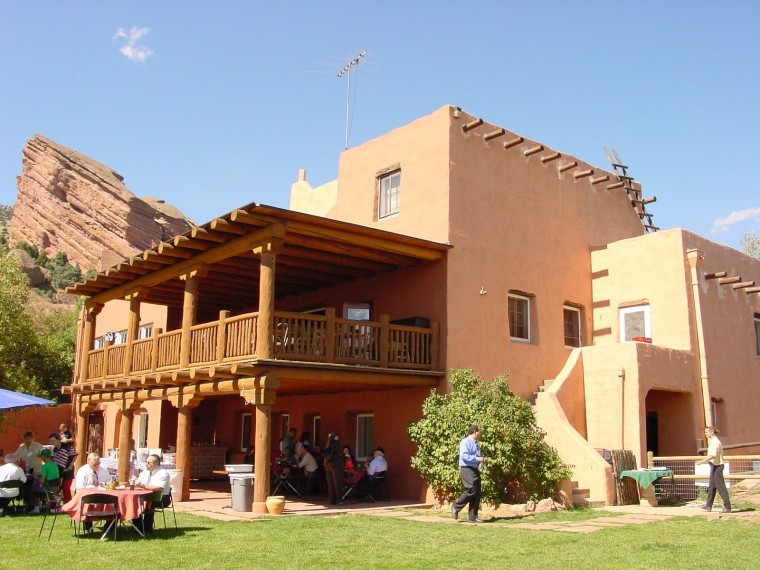 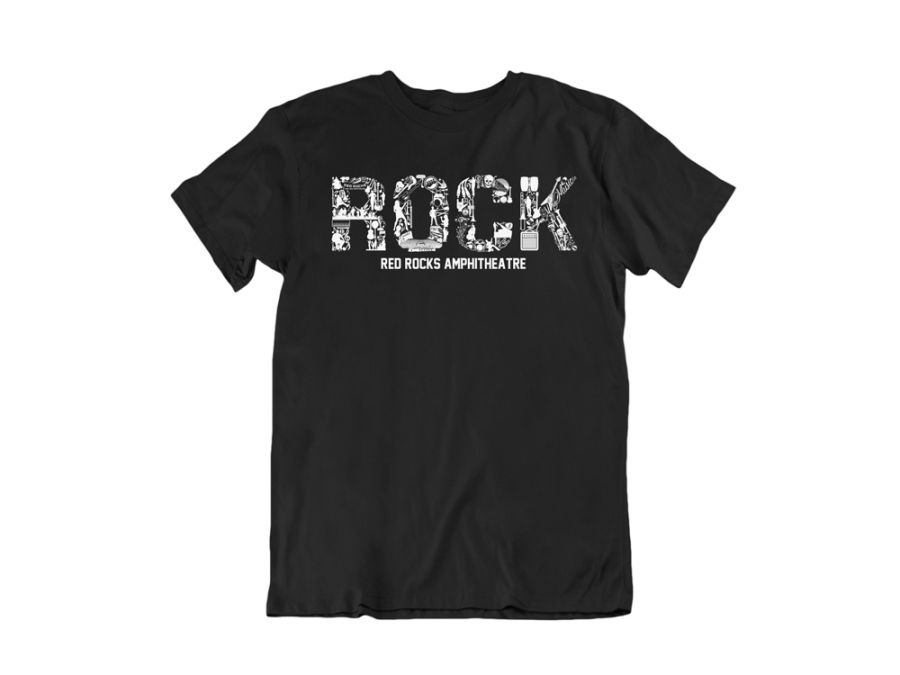 Including the ROCK mosaic by Colorado Caliber!
CLICK HERE TO ORDER ONLINE